IntelliSense is a context-aware code completion system based on language semantics. It detects characters during code typing and when user types so-called trigger character in a context that the compiler recognizes – IntelliSense completes the character immediately or suggests matches in a popup dialog. The user can accept the suggestion (using up and down arrow to precisely indicate element from a list and then pressing either tab key or enter key, or double-clicking on it), or continue typing. In this case IntelliSense filters the suggested list to only include elements containing typed characters. You can invoke it yourself using the shortcut <ctrl+space>.

When you type opening quotation mark, left bracket or left brace – IntelliSense immediately make the complete set of characters appear on the screen: “”, (), [], {}, and at the same time the cursor is positioned between them awaiting for typing letters/numbers. 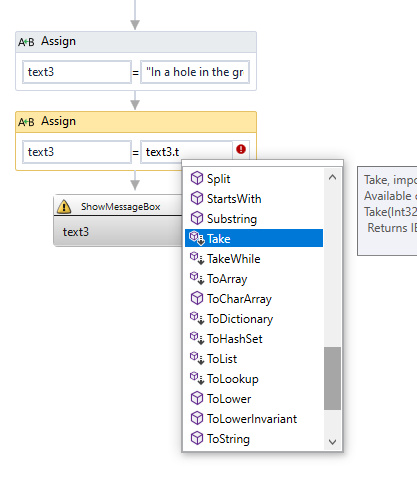 Suppose you want to see on the screen the first sentence from the novel The Hobbit by JRR Tolkien in capital letters. First you should declare a string variable containing the sentence (IntelliSense recognizes opening quotation mark as you start to type it and immediately complete with closing quotation mark). In the next assigning you need to add properties to variable – and again, when you type dot (trigger character), IntelliSense pops up the list of suggestions, filtering it as you type next letters of toUpper.

Are you curious how long is this sentence (characters and white characters - like spaces - together)? Let’s check it. Too long? Let’s cut out some part of the string. IntelliSense will help you with your tasks, offering character and word completion, speeding up your coding and reducing typos in your work. 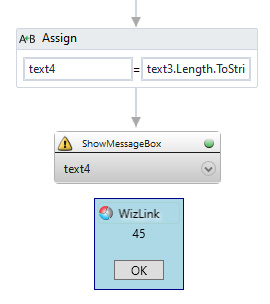 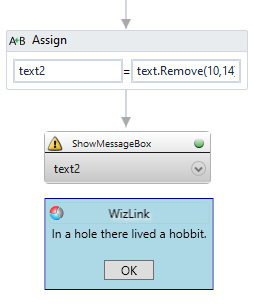